Tonight, a few friends are coming over, and we’re sewing some cloth dolls. At lunch, I was making sure I had everything – patterns, scissors, yarn and floss for hair… batting.

I had ONE bag of batting, and it wasn’t full. What could I do?

The Scrap Exchange, one of my favorite local reuse stores, had no batting for sale… but they did have this enormous stuffed Christmas bear for $1.

(And, bonus, the poor empty bear will have all the bits that could hurt a dog snipped off and become a dog toy – how frugal is that?)

Okay, let’s be real here. Cutting sucks. Maybe it will stop sucking eventually, but damn, I hate this part. I told my husband last night that I was pretty sure I was going to hate every part of quilting except actually having the finished quilt. Only then I remembered that I actually like ironing, so there would be one part I liked.

I think I’m hilarious, so I texted my mother-in-law the same thing, and she replied “Only you and my Grandma Edna like ironing. In the world.” Come on, that can’t be right? It’s not just me? Maybe?

So, anyways, I was all ready to start cutting, until I realized… I didn’t have a cutting mat. Sure, I had a rotary cutter, but no mat. I could have run out to the store, but I was frugal and lazy. I made my own.

No, this isn’t permanent. Yes, I’ll probably look back on it and cringe… but you know, it’s working fine. 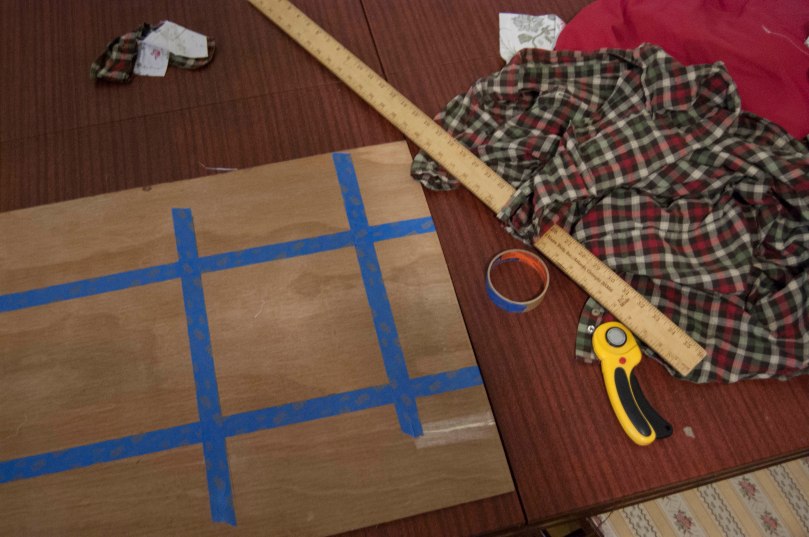 So, I have my cutting mat, and I even made a template on it in tape. That’s making it a lot easier to cut! You can see my messy piles up there – scraps worth saving, and stuff yet to be cut. My pile of cut squares was out of the shot.

Even more piles! It’s getting messier, because I’m going through my fabric stash and choosing more fabrics to go with the main fabrics I had picked in my first post. I’m trying to get all the cutting done in three days so that I can put the fabric away and have my dining room back.

With bonus toddlers running around, I haven’t been able to get a good shot of my stack of squares, but there it is.

Thirty out of a hundred down.

We’ve been having technical difficulties with our WW posts – please comment if you do NOT see a picture! ❤

Over here on Poppy and Aster we tend to be a little bit crunchy, but in all honesty, we do indulge in things like chocolate covered biscuits, or brownies. That’s why I, at least, go by “crunchy-ish”. Tim Tams are crunch cookie biscuits from Australia that have finally made their way stateside.

(Have a Koala, because… Australia)

If you’ve ever been to Australia, or if you know anything about the culture there, you’ve probably heard of Tim Tams. If not, never fear, because I googled in order to give you an authentic definition.

They are, according to our friend Wikipedia, a brand of chocolate biscuit made by the Australian food company Arnott’s and available in several countries. A Tim Tam is composed of two layers of chocolate malted biscuit, separated by a light chocolate cream filling, and coated in a thin layer of textured chocolate. Tim Tams are the world’s most popular chocolate biscuit per capita.

You read it correctly, the MOST popular chocolate biscuit per capita. So when bzzagent offered to send me a package to try, I was *so* excited.

Tim Tams have come to a store near us, the in the US, according to Bzzagent. They state: “Look for Arnott’s® Tim Tam® Original cookies at Target, Safeway, HEB and select Walmart stores nationwide for a suggested price of $3.29.”

I’d show you a picture of the packaging bzzagent sent, but my mailperson shoved it into my box, and I had to cut it out of my apartment’s little mail box. It was traumatic; I almost lost my chocolate. Do you feel the fear? Okay, not that traumatic.

Still, I got them into my apartment safe and sound after some grumping and pulling and cutting.

I’d never tasted one before, but I was so excited to! Chocolate covered chocolate biscuits with chocolate cream inside of them. What could be better?

The result: delicious, but sickeningly sweet. I mean it. One Tim Tam and I was absolutely done. Is this a good thing? I’m not sure. I do know that I can’t eat more than one without feeling a little sick and that while they taste good the sweetness is overwhelming.

It’s a good quality chocolate, not waxy, but milky and creamy, and it does taste good, but I think even the very small wafer is almost too much to each all at once. Or by itself.

I guess that is why people recommend a Tim Tam Slam. This is a method wherein you bite off the ends of your cookie, stick it in coffee, hot chocolate, or in my case, chai tea, and suck on it until it is full of the liquid and then slam it back in your mouth. 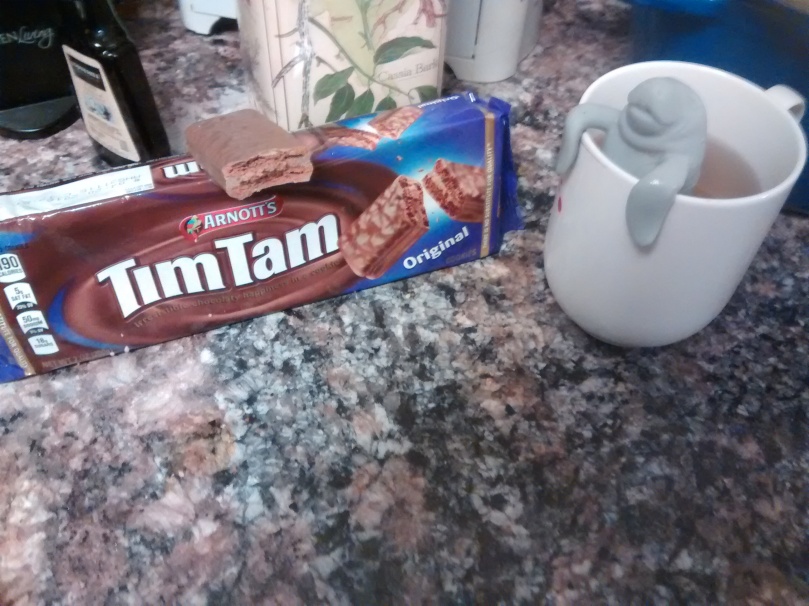 Yes, that’s right, you fill that chocolatey-sweetness with caffeine or more chocolate and then eat it as it melts. Sounds delicious, right?

It absolutely is, but it only seems to intensify the feeling of indulgence. I do not recommend doing this more than once in a row because you will ruin your dinner.

I totally ruined mine 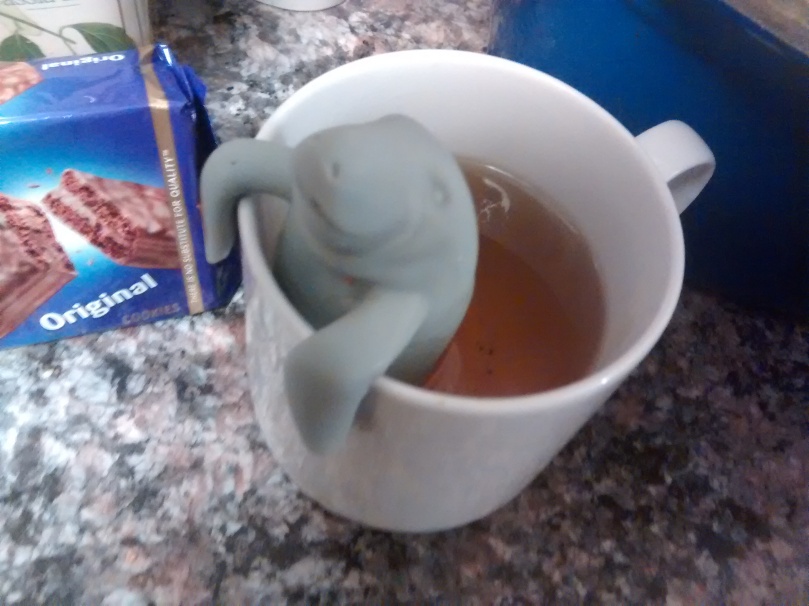 Oh, the hu-manatea! (If interested, the “ManaTea” pair can be purchased via amazon).

I wouldn’t go out of my way to buy these very often. They are pretty pricey here in the US, and they are just *too* sweet for me. That being said, I can see craving these little cookies a few times a year now that my palette has been introduced to them.

If you want a really indulgent treat that goes great with chai tea, I highly recommend the Tim Tam.

Camping is one of those things that I love, I have put a lot of time and effort into trying to make my vacations as frugal and fun as possible. I want to get out and see the world, but I have a teeny tiny budget. I love camping because it gives me the ability travel, affordability or adventure! In this series, I’m going to walk you through the basics of choosing your own camping adventure.

There are so many options when camping that can make the experience vary wildly. These options also come with extra costs depending on what you choose, but I’ve researched a lot, and I have to say, most of them are more affordable than any hotel I could stay at.

You can usually choose from primitive, tent sites with or without electric, RV sites, or even cabins. I’m going to walk you through each different type of site.
Primative Camping 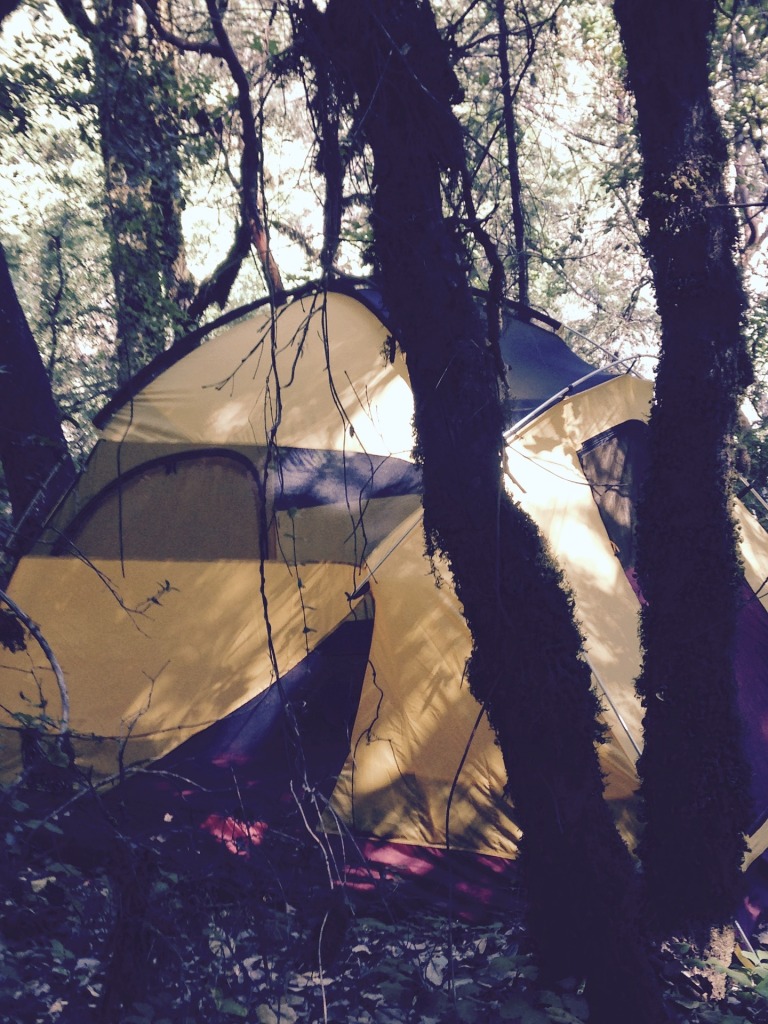 If you are like my husband, you might prefer a primitive site, with no restroom, no shower, and no tent pad. These are the best ways to get away from nature, as well as isolated from people as possible. It sounds serene, but it also requires a lot more work.

They are often very affordable, or even free, with entry into a state or local park. Different states have different regulations, though. So your mileage may vary.

If you need a bit more luxury, like me, you’ll want a tent site with or without electric. They usually come with tent pads or a level area that is perfect for pitching a tent. This makes camping in groups easy, fun, and afforable (you can usually share a campsite 2-3 tents).  Many of them allow for pets, have access to showers and restrooms, and some even have laundry facilities.

If you need even more creature comforts, I would suggest an rv or camper site. You can rent or bring your own. Which, if you want to be an enthusiast traveler, or you happen to have a hand me down, can be a great way to see the country cheaply. They are usually included in normal campground sites, and may cost a few dollars extra. 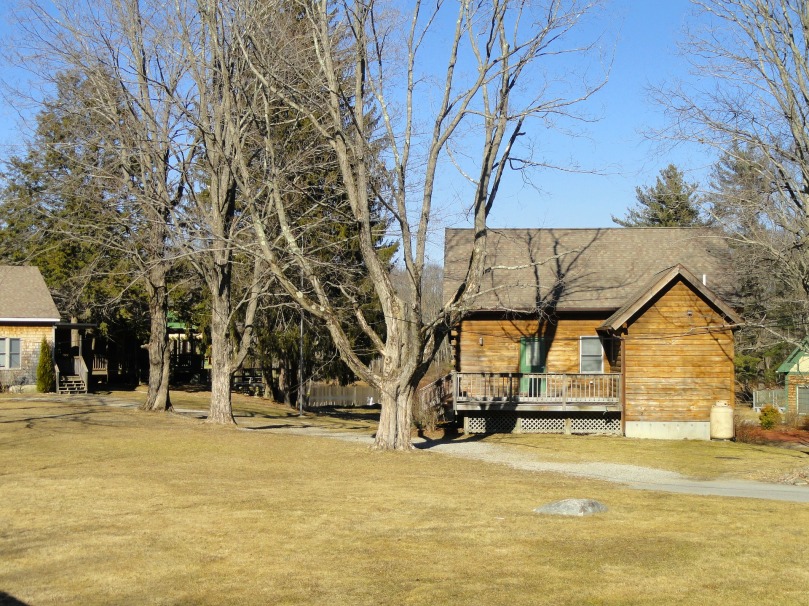 Finally, we have cabins, which are like single hotel rooms out in the woods, some with, some without restrooms. They are wonderful for romantic getaways, or if you like to have all the living of home with the added bonus of nature. It may not come with a rugged camping experience, but it’s a good way to get a vacation for less than a hotel.

Whatever you decide, knowing what you want will help prepare you for what’s ahead.

I’ve finally chosen the fabric for my very first quilt, thanks to a very lucky find at a thrift store I love…

I got two cotton pillowcases with this print! I love it – the neutral floral print with touches of red and blue? YES. That is right up my alley. I was already pretty sure it had to come home with me… and then I found more! 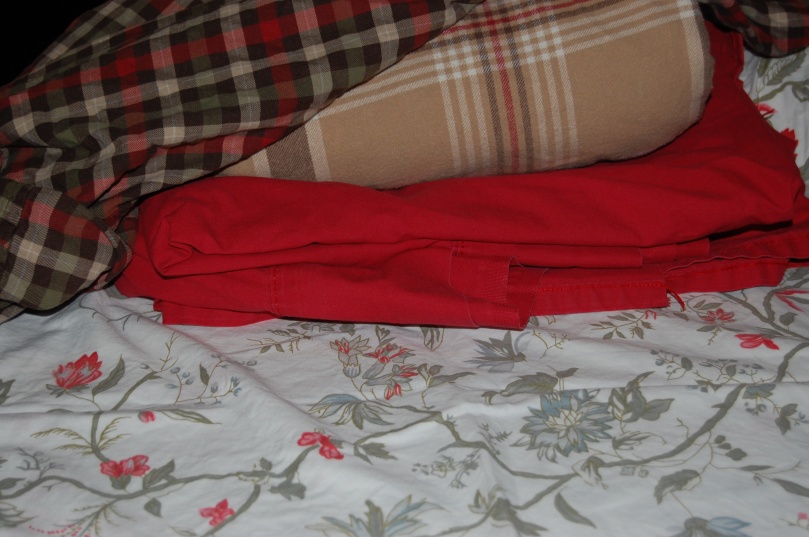 A bright red sheet – the main solid to go with the pillowcases? Check. The large tan plaid is a flannel sheet, just the right colors to be the backing for my quilt! I’d gone to the thrift store with my mother, and, providentially, she was donating that dark plaid shirt. Nope. Just the right colors to join my quilt.

I have some more fabric from my stash to round it out, I haven’t chosen those quite yet – I’ll totally have to take plenty of pictures when I do! I’m SO happy with these four, though. Just the right start.

I got the batting, too!

This flannel sheet actually looks way better in the pictures I took. In person, it’s pretty dingy and sad. Yellowed, aged, pilling horribly… not worth putting on my bed. It should be absolutely perfect to round out my quilt sandwich, though! I prefer thin quilts, it’s too warm in North Carolina for high-loft quilts ten months out of the year. Two layers of flannel and a quilt top should be plenty.

So, the total damage for my first quilt? $5. Plus some stash fabric and thread.

I think I can justify that.

This is not going to be a very detailed post, because, well… smoothies aren’t the most fascinating subjects. At least to me. They’re pretty, though, and delicious.

I started with frozen berries – strawberries and blackberries from the store, and blueberries we picked ourselves! 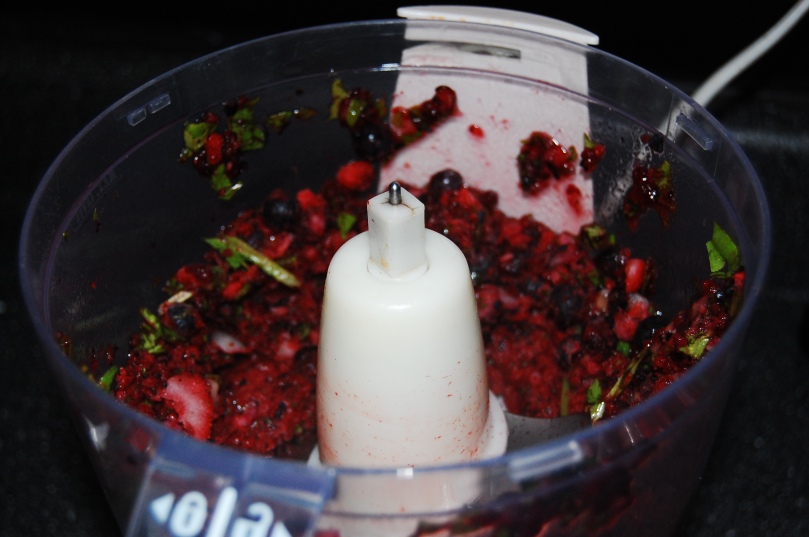 I could find absolutely no way to make this stage look appetizing. It’s not. It’s just some crushed fruit and spinach – but add a banana and some pear juice, and the magic happens!

See? Look at that. Totally magic. Like, one hundred percent. I enjoyed the hell out of that smoothie.

We’ve been having technical difficulties with our WW posts – please comment if you do NOT see a picture! ❤